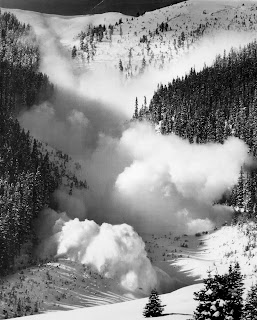 It’s that time of year again.
My yard is full of glistening snow. A handful of my fellow Colorado drivers act like they’ve never driven on icy roads before. Flames in the fireplace are a nightly occurrence. And my backcountry skis are practically vibrating at me from my gear room.

It’s time to hit the big hills, climb up them and then ski down them. And I’m not talking about shushing down slopes at Vail and Aspen dressed in your pastel unitard.
I’m talking about earning your turns.
Ski sweat equity.
Tele till you’re smelly.

Skiing in the backcountry with friends is absolutely one of the most pleasurable activities that I pursue. Even when the conditions are less than ideal… i.e. bullet proof, wind blown or just cold as balls… it’s still so much stinkin fun to go out with good peeps, skin up the flanks of some big hill and scoot down steep glades amongst the rocks and trees without the mayhem of an overcrowded ski area.

And other than the occasional gear malfunction or annoyingly painful foot blister there is only one potentially ass whoopin issue that is ever-present.

I’ve been in two. That’s two too many. I am making it my mission to never be in another.

This morning as I was reflecting on the potential for this season to be fat…and I’m talking phat as in phluffy… I started to consider the massive amounts of precipitation we have received here in Boulder County over the past several months (the same flood that walloped my downstairs). The hope is that this trend will continue into the winter providing us with blankets of fresh pow all season long.

I also dove in to my annual avalanche data review…just to brush up on the nature of why and when a group of innocent snowflakes up and decide they are just tired of sitting where they are and take a fast ride down because all of their millions of snowflake buddies are doing the same thing.

It was then that I began to realize the interesting parallels between the nature of avalanches and the nuances of life.

A few of the snowflakey pearls…

Understanding recent weather patterns…
Months of history play in to what is happening right in front of you.  It’s always easy to just look at things (people) for what they are on the surface when in reality there are many issues that lead up to how things are manifesting right at this moment. There have been storms. There have been sunny blue-bird days with excessive heat. There have been days with high and swirling wind. Each day is it’s own component that create the picture that we all bring to the table. Acknowledging the past provides us more compassion in dealing with the present.

Weak layers lead to fracturing…
It’s easy to forget that we all have layers upon layers of personality that all surface from time to time.  Although each layer sits in close proximity to the others, they are all exquisitely unique from the others. In the case of a big ripper avey… it’s always the hidden layer that is the catalyst for failure. As much as we try to hide our unstable layers…those are the ones that require the most attention. They are the ones that break.

Wind deposition can load a slope…
Wind can deposit snow 10 times faster than actual snowfall from storms. Wind will drive snow into sheltered parts of the mountain in many different directions during a storm and deposit significantly more snow in otherwise unreachable terrain. Wind is sneaky. It picks up those sweet little innocent flakes and lays them down in a spot they didn’t intend to lay down in. It’s the mystery variable that is unpredictable. Erratic behavior that leads to dangerous conditions. It's just part of it.

Being smart when traveling through sketchy terrain…
Just because you’re not on a slope doesn’t mean all is safe. Many accidents occur to parties that are down in a drainage or run off zone. It’s the slope that’s way up high and off your radar that can sabotage you.  Being aware of surroundings and out-of-site terrain is critical.  It’s easy to become complacent in a “safe zone” and fail to recognize that the peripheral issues can slap you down if you neglect to stay vigilant.

Knowing when to stand down…
Sometimes the pieces of the puzzle just say STOP. Go home. Many climbers and backcountry skiers have an internal voice that occasionally will beckon that it’s just too sketchy today. Live for tomorrow. Ego and pride can take you up a steep slope and place you precisely in the sites of a Howitzer machine gun of a slope that doesn’t give a shit how bad ass you think you are or what mountains you’ve climbed in the past. Humility and recognition will place you back at your truck so you can plan for the next day out.

Being solid with rescue skills and traveling with capable teammates…
I owe my life to the couple of guys I was roped up with in Alaska when I got tumbled down a hill towards a massive, bottomless crevasse. They knew how to self-arrest. They acted quickly in digging me out. They were reliable. Surrounding yourself with trustworthy and knowledgeable teammates is the only chance you have in the case that you are hit by a wall of snow. Also of importance here is for you to be reliable and strong for the other folks in your party. Careful with who you put on your rope team. A time will come when you will need them…and they will need you.

Risky but worth it. The ROI is high…
The funny thing about avalanche prediction is… the more you know, the more you realize that avalanches are very hard to predict. You can only arm yourself with some fundamental knowledge and skills and be sure that the folks around you are also capable. Avalanches are like the funny adventure of life… they are unpredictable at best… but simply a part of the overall journey. Nothin worth doing is without consequence.
But in the end…it’s worth the risk. Some of my very best days of every year are spent skiing down mountain slopes with my buds… even though we all know the risk. The joy is deep and fulfilling. The risk is apparent. It’s just a matter of acknowledging the contributing factors and embracing them.

As a highly sought after speaker / facilitator with over 20 years delivering engaging and impactful keynotes to hundreds of clients, Jeff has made appearances at dozens of Fortune 500 companies around the world. Jeff takes the audience on a journey to high peaks around the globe, detailing his exciting endeavors as mountain guide, adventurer and philanthropist. These experiences have allowed Jeff to hone his skills of servant leadership, teamwork, communication and handling adversity which he shares in a way that is applicable to everyone in their business and personal lives.